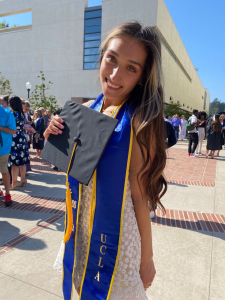 Vanessa earned her B.S. in Psychobiology from UCLA in the spring of 2022. During her time as an undergraduate, Vanessa completed 200 hours of clinical interning at UCLA Ronald Reagan Medical Center where she was introduced to the world of healthcare. Additionally, she was involved in the club MEDLIFE at UCLA with whom she traveled to Lima, Perú where she assisted in mobile clinics and was introduced to healthcare systems abroad. Later in her undergraduate career, Vanessa developed an interest in learning models and neuronal reward circuitry through participation in two of Dr. Sharpe’s courses.

Upon graduation, Vanessa became a member of the Sharpe Lab where she started on a project that investigated the role of VTA GABAergic neurons in reward learning. Specifically, we are currently probing how sensory representations elicit reward motivated behavior.

Vanessa’s plans to incorporate her curiosity for neuroscience and behavioral phenomena into a career in healthcare where she can use this knowledge to understand and treat psychopathologies such as addiction and schizophrenia.

Outside of the lab Vanessa enjoys practicing yoga, eating Salt & Straw ice cream, and enjoying time with her friends and family.